Learnings from SICP (and Lisp) 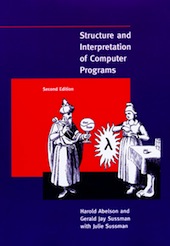 Recently I took the liberty of reading one of the defining books in the domain of computer science: The Structure and Interpretation of Computer Programs, often abbreviated as SICP.

SICP is the computer science textbook given to undergraduates at MIT. It serves as an advanced text on software design and as an introductory text for the Lisp programming language.

Here are some interesting things I learned:

Units of computation can be abstracted in several forms:

For you youngin’s that have never used Pascal, just replace “Pascal” with “Java” in this section and you should get the right idea.

The Pascal philosophy has won out in most statically typed languages such as C++ and Java, and in languages with poor (or nonexistent) built-in collections.

The Lisp philosophy is more common in dynamically typed languages that lack built-in support for classes, such as Lisp itself and JavaScript.

A hybrid approach (using both philosophies) is seen in languages that are dynamically typed, have built-in collections, and have built-in classes, such as Python and Ruby.

Polymorphism is where multiple abstract data types implement a common interface, which is typically defined as a series of methods that can be called on all implementing types.

This allows client code, when given an object known only to implement a particular interface, to invoke interface methods on the object and end up calling the correct implementation of that method depending on the runtime type of the object.

Polymorphism can be implemented in several different ways:

Many languages provide a default implementation strategy as a language construct. For example C++ and Java use virtual lookup tables. Smalltalk and Objective-C use message passing. C doesn’t give you anything for free, so you have to roll your own polymorphism.

These implementation strategies for polymorphism have some tradeoffs, which are worth knowing:

Introducing cross-type operations, such as add(Integer, Complex), is a very tricky design issue.

Another strategy is to use coercion to convert a value from one type to another. So instead of defining add(Integer, Complex), just define convertToComplex(Integer) : Complex, and use the existing add(Complex, Complex). To convert between all types requires at least n but no more than n2 conversion functions.

Many programming languages have built-in facilities to automatically coerce types. For some languages (like JavaScript or PHP) these coersion rules are quite complex (and error-prone). Other languages (like ML) ban implicit coercion entirely.

One wrinkle is that these conversion functions might introduce a loss in precision. For example not every integer can be represented as double of exactly the same value.

Assignments, Mutable State, and Side Effects

Introducing assignment creates lots of complications. In particular referential transparency is lost. Optimizations related to reordering and coalescing expressions need to be a lot more careful. Static reasoning of various kinds is impaired.

To reduce bugs it is best to minimize the use of mutation by using immutable objects whenever possible.6

Haskell takes a very aggressive stance against assignments, mutable state, and other side effects: they are banned by default. However Haskell does allow side effects within the context of a monad. This is a special construct unique to Haskell (so far as I know).

Normally expressions are evaluated immediately, in the order that they occur in code. Lazy evaluation changes this behavior such that expressions are only evaluated when some primitive operation (like print or add) requires the value of the expression. Until then the unevaluated expression is passed around (as a “thunk”).

Lazy evaluation enables that creation of lazy data structures, which is a useful performance optimization in some contexts.

Logic programming languages are at the far declarative end of the imperative-declarative spectrum. They can be used to deduce answers from a set of initial set of declarative statements.

Prolog is the best-known example of a logic programming language.

Query systems for databases are a type of logic programming language.

A “query” (i.e. an expression in the language) is transformed into a “query plan” (i.e. a specific set of steps to follow) by a query planner. The implementation of these planners is quite complex.

So those are a few interesting things I learned from reading SICP. Taking notes while reading made it a lot easier for me to remember the content. You might try it when reading a technical book with a lot of new concepts.