Color is a perceived property of light that enters the eye.

Understanding color requires understanding of light, the inputs used by people to detect light (i.e. tristimulous cone responses), and the mental process used to synthesize these inputs into a perceived color.

Light can be described as a signal: an amplitude that varies over time.

This signal (in the time domain) can be transformed to another signal in the frequency domain which makes it easy to see what individual frequencies of light contribute to the overall light signal.

Light produced by incandescent bulbs is continuous but heavily-weighted toward the higher (red) frequencies.

Light produced by florescent bulbs (CFLs) varies considerably depending on the type of phosphurs used in the bulb.1 However all CFLs produce discrete spectra, combining only a few tiny frequency bands. Discrete spectra (and thus CFLs) are not good for color discrimination.

A color C as perceived by person P can be described by a tristimulus value (S,M,L) corresponding to the level of excitation of the S-cones, M-cones, and L-cones in the eye of person P.

Cone tristimulus values are ultimately what the brain perceives as color. This is rather interesting because it means that color is not an absolute property of light. In fact you can have different light signals that generate the same tristimulous values (i.e. perceived color) in the same person.

Each type of cone is sensitive to different frequencies of light.

Among people who see color normally (“color-normatives”), each type of cone has approximately the same frequency response across individuals: 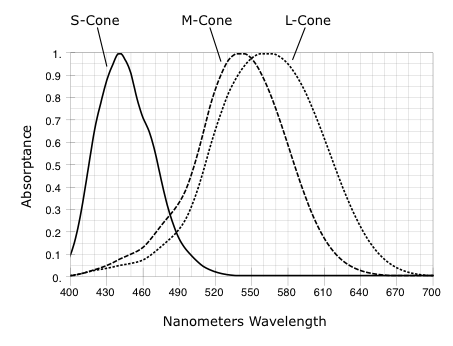 To obtain the tristimulus value (S,M,L) for a particular light signal, the light signal in the frequency domain must be multiplied by each cone’s frequency response graph (or absorbtance graph), and then integrated over the full domain.

A person who is colorblind has cone types whose frequency response graphs differ from color-normatives.

Research suggests that the most common type of alteration to the typical frequency response graphs is that the M-cone and L-cone graphs are shifted closer together, making it more difficult to distinguish frequencies close to 550nm (i.e. red and green).

EnChroma glasses make it easier for colorblind persons (and even color-normative persons) to distinguish colors in the presence of bright full-spectrum light (such as sunlight). These glasses work by reflecting a narrow frequency band between the M-cones and L-cones.2

I speculate that this selective reflection strategy improves color differentiation ability by causing higher contrast between the M-cone and L-cone tristimulus values when wide-spectrum reds and greens are viewed through such lenses.

In summary I expect EnChroma glasses to be useful in improving color discrimination for full-spectrum light sources such as sunlight, incandescent bulbs, and special full-spectrum “daylight” bulbs. However I do not expect any improvements in color discrimination for narrow-spectrum light sources such as flourescent bulbs, computer monitors, and backlit phone/tablet screens.